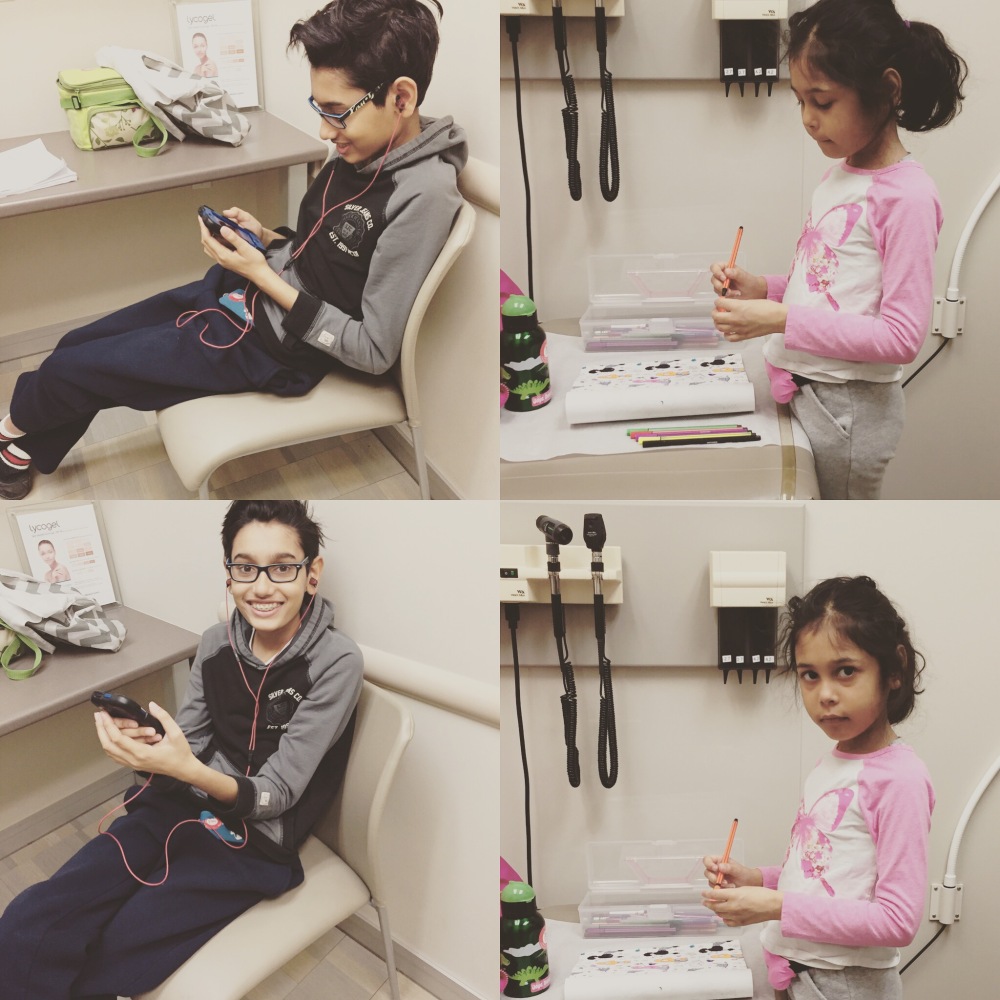 Yesterday we made our biweekly drive to Burlington, Ontario to see Dr Mack, the pediatric allergist who is treating Sahil and Jaya. Or as Jaya calls him Dr “Mac and Cheese” which is ironic since she cannot eat the real stuff…..yet!  I think of him and Dr Hanna as heroes as they are the only allergists in Canada that I know of who are offering oral immunotherapy to patients outside of clinical trials.

Since we started the oral immunotherapy treatment (OIT) my dad has been accompanying us on each trip.  Food allergies were unheard of when he was growing up in India or even after my parents immigrated to Canada almost fifty years ago.  In India, my mom says, kids are fed everything early and it turns out there is a low rate of food allergies there. Western countries have adopted various feeding guidelines which may have actually caused the dramatic rise in food allergies because of limiting introduction of allergenic foods until after 1 or 2 years  old.  Recently those guidelines have been changed and the medical community now says to introduce those foods early (4-6 months) and feed them often.

You can read about those changes here: https://www.thescientificparent.org/can-we-really-prevent-peanut-allergy-by-feeding-it-to-infants/

It is frustrating since the current guidelines are the polar opposite to the advice I received when my kids were born. It is devastating to find out that their allergies could have been prevented by introducing the allergenic foods earlier.  Although, Jaya did have milk early – she reacted to a cereal with skin milk powder at 5 months so the early feeding is not the only factor involved in developing a food allergy.

This is our fourth visit to Dr Mack’s office for OIT.  But for both Sahil and Jaya it is just their 2nd updose because they were ill in late Feb and early March and were on the starting dose for a prolonged time.

They are used to the routine of the appointments now.

Then Heather, the nurse, takes us in to one of the treatment rooms and measures their lung function, temperature and blood pressure.  Next, she takes the milk that I have brought to prepare Jaya’s diluted milk solution.  Sahil’s peanut solution comes pre-mixed from a local pharmacy.  Then, depending on who is in clinic on our appointment day, Dr Mack or Dr Hanna come in and speak to the kids and me.  I like that they speak directly to the kids and ask them how they are doing and how the past two weeks have been.

Yesterday, it was Dr Mack.  He measures out their doses and administers it to them.

Sahil updosed to 2 mL of 0.5 mg/mL solution and Jaya updosed to 4 drops of the highly diluted milk solution.

Dr Mack stays in the room for the first ten minutes after the dose to monitor them.  He talks with us about his recent visit to Atlanta for the Annual American Academy of Allergy, Asthma and Immunology conference: http://annualmeeting.aaaai.org/  where he said there were many sessions on oral immunotherapy studies.

We usually stay in the office for an hour and a half after the dose to be monitored for any symptoms of a reaction to the updose.  We are prepared for being away from home and school for half the day.  We take enough snacks for the morning and activities. Sahil plays on his iPod and Jaya colours.

Nurse Heather checks in on us a couple of times and then we are asked to go the waiting room for another hour.   Soon after her dose, Jaya complains of a slight stomach ache but it subsides within about 30 minutes – she thinks it’s because she ate her snack really fast. So maybe it’s not dose related? I don’t know for sure. Her stomach ache passes so we are cleared to head home.

For the next 2 weeks we will continue on 4 drops for Jaya and 2 mL for Sahil.

P.S. If this post was boring it’s good.  OIT is going well when it is boring (uneventful and no reactions).